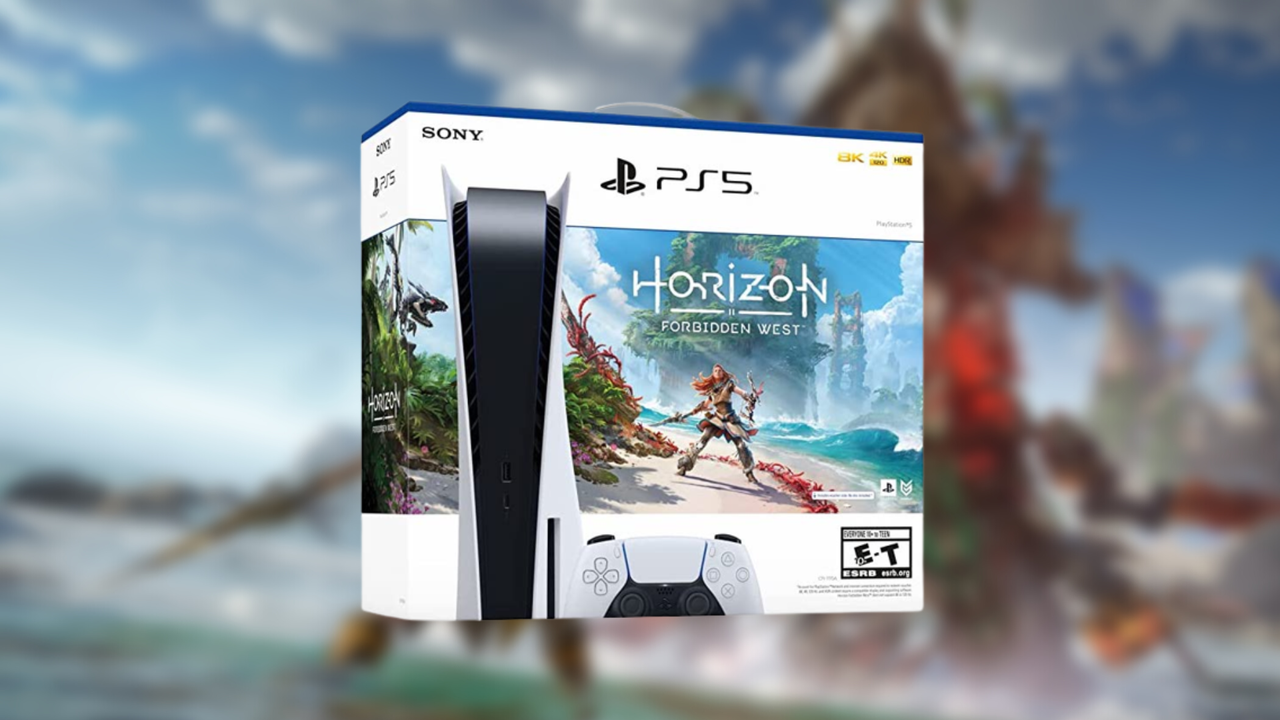 There are a lot of deals for folks looking to buy a new console today. The PS5 is now in stock at Walmart with Horizon Forbidden West. Xbox fans can take a look at the Xbox Series S deal that includes a selected game, such as Elden Ring or Forza Horizon 5, for a discounted price. Amazon now offers the Nintendo Switch OLED Edition Splatoon Edition. Plus, check out more deals like the lowest price ever on a 65″ LG C2 OLED 4K TV, a GeForce RTX 3080 GPU for $699.99, or the latest Apple iPad for only $279.99, and more.

The PlayStation 5 needs no introduction, and even almost two years after release, it’s still very hard to find. Today, you can get the disc edition of the PS5 from Walmart as part of the Horizon Forbidden West PlayStation 5 bundle. And, despite getting an unfortunate price hike in most of the world, the price in the U.S. is still the same, meaning this bundle comes in at about $549. If you’re interested, don’t wait too long, as we don’t know how long this will stay in stock.

Get an Xbox Series S with Forza Horizon 5 for Free

On the Xbox side, you can get the cheapest current-gen console for $299. Yes, that’s the Xbox Series S’ normal price, but this one at Amazon comes bundled with a digital copy of Forza Horizon 5, which won IGN’s Game of the Year award last year. If Forza’s not your thing, this same price applies to bundles where you can select games like Elden Ring or LEGO Star Wars, both of which are not on Xbox Game Pass, unlike Forza Horizon 5.

This is the lowest price we have ever seen for the 65″ and 77″ LG C2 OLED TVs. The LG C2 is, in my humble opinion, the best mainstream OLED TV to get right now. Unlike other brands who have only recently started pushing out OLED TVs, LG has several generations of updates and improvements over the years. The C2 is the newest model and it features an improved “Evo” OLED panel over the C1. Previously reserved only for the LG Gallery Series OLED TVs, the Evo panel offers higher brightness levels and thus better HDR range.

This is a perfect gaming TV. It has four HDMI 2.1 ports and a native 120Hz panel that supports true 4K @ 120Hz passthrough when paired with a PS5, Xbox Series X, or RTX 30 series equipped PC. There’s also variable refresh rate (VRR), which is this TV’s version of adaptive sync technology, as well as auto low latency mode (ALLM), where the TV automatically switches to a lower latency when it detects gameplay. The LG C2 also supports HGiG, which is automatically calibrated tone mapping specific to your TV model.

The first themed Nintendo Switch OLED is now available on Amazon. The Splatoon Edition includes a sweet pair of blue and yellow gradient Joy-Con controllers (white underbelly) and a graffiti adorned Switch body and docking station. It’s only $10 more than the retail cost of the standard Switch OLED console, and in my opinion, more than worth the surcharge.

This amiibo figure from Nintendo originally launched way back in 2017 alongside Splatoon 2. The figure quickly became hard to find and expensive from online resellers. Now, five years later, the Splatoon 2 Inkling Girl figure has popped back up for normal price over on Amazon. If you’re a big Splatoon fan picking up the special Nintendo Switch OLED listed above, this is another great add to your Splatoon collection.

If you buy a lot of digital games on your Nintendo Switch, don’t miss out on this deal for a $50 Nintendo eShop gift card for $45. At this price, it’s essentially free money, as you can pay $45 with the included promo code for $50 worth of funds. If you’re picking up indies like Cult of the Lamb or Cursed to Golf, or upcoming AAA Nintendo titles like Splatoon 3 or Pokemon Scarlet and Violet, this deal just makes sense.

Fast and Furious Board Game On Sale for Under $10

This is a cooperative board game taking place within the crazy world of the Fast and Furious movies. There are multiple different scenarios, including running from Fast 5’s tank, stealing from a semi truck from the original movie, and avoiding Shaw’s helicopter from Furious 7. I’ve played this myself, and it’s a fun, wacky way to experience the world of Fast and Furious, and it’s on sale today for under 10 bucks.

The GeForce RTX 3080 GPU has finally hit its original MSRP from back when it launched. The MSI “Ventus 3X Plus” GeForce RTX 3080 GPU is the least expensive RTX 3080 variant on Amazon right now at a solid price of $699.99. The RTX 3080 really doesn’t need any introduction. This is the de facto card to get if you plan to run current generation games at 4K, since it’s up to 50% faster than the previous generation RTX 2080 SUPER and doesn’t command the exorbitant price of the RTX 3080 Ti or RTX 3090 (both of which are a mere 3%-5% faster in real world performance). It has an HDMI 2.1 port for passing through 4K @ 120Hz, which it has the power to drive even with resource hungry games like Elden Ring.

This is the lowest price we’ve seen for the newest Apple iPad (it was $299 on Amazon Prime Day). Apple’s latest 10.2″ iPad is a great option for school, work, or simply relaxing with your favorite movie, book, or streaming service. It features the new Apple A13 Bionic chip for fast CPU and GPU performance to tackle just about anything, and the large 10.2-inch Retina display ensures everything is bright and crisp during use. iPad also features both a front-facing camera for voice chat, and rear camera for taking photos and videos.

This was one of the most popular gaming laptop deals during Amazon Prime Day, and it’s back for a cheaper price! That’s right, this particular ASUS TUF Dash 15″ gaming laptop was priced at $1100 on Black Friday, but it’s only $999.99 today. It features an RTX 3060 GPU with 105W max TGP and the newest generation Intel Core i7-12650H Alder Lake processor. The new Alder Lake processors are a significant performance bump over previous gen Intel CPUs. Complementing these specs are 16GB of DDR5 RAM and a 512GB SSD.

The Dell S2721DGF is one of the best 27″ gaming monitors under $500, and it’s heavily discounted today. The S2721DGF boasts a QHD (2560×1440) resolution, a high quality IPS panel with wide viewing angles and excellent color rendition including 98% DCI-P3 color coverage, a super fast 1ms response time and up to 165Hz refresh rate through the DisplayPort. It’s also FreeSync Premium Pro and G-SYNC compatible.

Woot has the Zotac GeForce RTX 3090 GPU for only $999.99. This is an outstanding price for one of the most powerful video cards available. On Amazon, the least expensive RTX 3090 GPU is over $1300. Although the RTX 3090 is indeed a best-in-class gaming card (it’s as much as 20% more powerful than the RTX 3080 at 4K resolution), it’s actually not really intended for gamers. The RTX 3090 is the workstation GPU of choice not because of its processing power (which it has in spades), but because of the massive 24GB of GDDR6X RAM.

Amazon has the Apple Watch SE with both GPS and cellular connectivity for only $229.99. We’ve seen the GPS only model go down to this price but never the pricier GPS and cellular model. Despite the considerably lower price tag than the Apple Watch Series 7, the Watch SE is still big on features, such as a large Retina OLED display, 2x faster CPU than the Series 3, heart rate monitoring, GPS, swimproof design, haptic feedback, and more. If the health-centric features on the Apple Watch Series 7 don’t spark your interest, you might be better served saving $170 and going with the SE.

This is one the only ways to get your hands on a Sega Genesis Mini 2 preorder, which releases in late October. This is the new and improved version of the Sega Genesis Mini that was released back in 2019, with better hardware, a small footprint based on the Sega Genesis Model 2, and and over 50 preloaded games including Sonic the Hedgehog CD, Shining Force CD, Virtua Racing and more (not all games have been announced). Note that there will be a $21.99 overseas shipping charge.

This Arcade1Up Streetfighter II “Big Blue” Arcade Cabinet normally sells for $600, but Walmart has it on sale today for only $399.99. Unlike most other Arcade1Up cabinets, this package includes a matching stool and a themed riser. The Arcade1Up Street Fighter II cabinet is a 3:4 replica of the arcade original, making it approximately 4 feet tall. That riser raises the height by another 1 foot, giving you the option of both sitting and standing play. Also included is a light-up marquee, light-up deck protector, and a Street Fighter themed stool. If you don’t have a buddy around to play with, you can hop onto the live WiFi (no subscription required) to play with other remote Arcade1Up players. 12 games are pre-loaded including several editions of Street Fighter II, Super Puzzle Fighter, and Darkstalkers.

40% Off HBO Max When You Prepay For a Year

Game of Thrones’ House of the Dragon Premieres August 21

Sign up for 1 Year of HBO Max, Save 41.6% Off Compared to BuyingMonthly

This is the perfect time to sign up for HBO Max. The highly anticipated Game of Thrones’ House of the Dragon premiered exclusively on HBO Max starting August 21. Set 200 years before the events of the original Game of Thrones TV series, House of the Dragon covers the fall of House Targaryen. In addition to Game of Thrones, HBO Max is host to the entire collection of DC movies (including The Batman), Harry Potter series, Lord of the Rings and movies like Dune, King Richard, Free Guy, and much, much more.

Wingspan is an incredibly good board game. So good in fact that we deemed it the best board game of 2019. Improbably enough, the year’s hottest game is one about keeping birds in a nature reserve. But the wide appeal of the theme, lovely art and simple rules meant lots of players got to enjoy the fiendish engine-building game beneath. A choice of a mere four actions blossoms into an excruciating balance between adding birds, feeding them and scoring points. Yet tricky as it is, the pace of play leaves you itching for another try to evolve your strategies, while 170 bird cards ensure every game is different. The board game is worth it even at the $65 retail price, but today it’s nearly 40% off.

The Apple TV 4K happened to be one of Amazon Prime Day’s hottest sellers. Today’s price is the same as on Prime Day. The Apple TV’s latest version features two major improvements. It includes an A12 Bionic processor which improves graphics performance, video decoding, audio processing, and delivers high framerate HDR with DolbyVision. It also features a new Apple TV Remote. The overall build quality is much better than before. However, the most important enhancements include a 5-way clickpad and mute button. Also, there is a dedicated power button that works with your Apple TV, receiver, or TV.

Toys Daily Share - July 20, 2022 0
We have been blessed by the bargain gods, as Aldi and Harry Potter were merged together! The bargain supermarket giants have started selling a full...