Four distinct ninja-themed vehicles come together to form one big mech in 71765 Ninja Ultra Combo Mech, but there’s no reason you have to combine them all every time. We’ve tested out all of the permutations, with lots of fun results.

Everything starts with Kai’s mech, which forms the core of the Ultra Combo Mech. You’ll see it in every picture in this article, since it’s the base to which everything else gets attached.

First we tried adding the central part of Jay’s flyer, which turns the mech into a robotic one with a new head and decorative flags. Not a bad look, and having a head above the shoulders makes for a nice effect. Next we tried just the sections of Cole’s driller car, which add a lot of extra bulk and weaponry on to Kai’s mech, which by default has very meagre arms. A lot more posing can be done now, but it does have a tendency to topple over since the legs aren’t quite enough to support the heavy arms all the time.

We can power it up even more with the wings of Jay’s flyer, adding extra shoulder pads above the driller arms. One more stage forward in the combining process and we put the robotic head back into the mix, but this looks much too top-heavy. 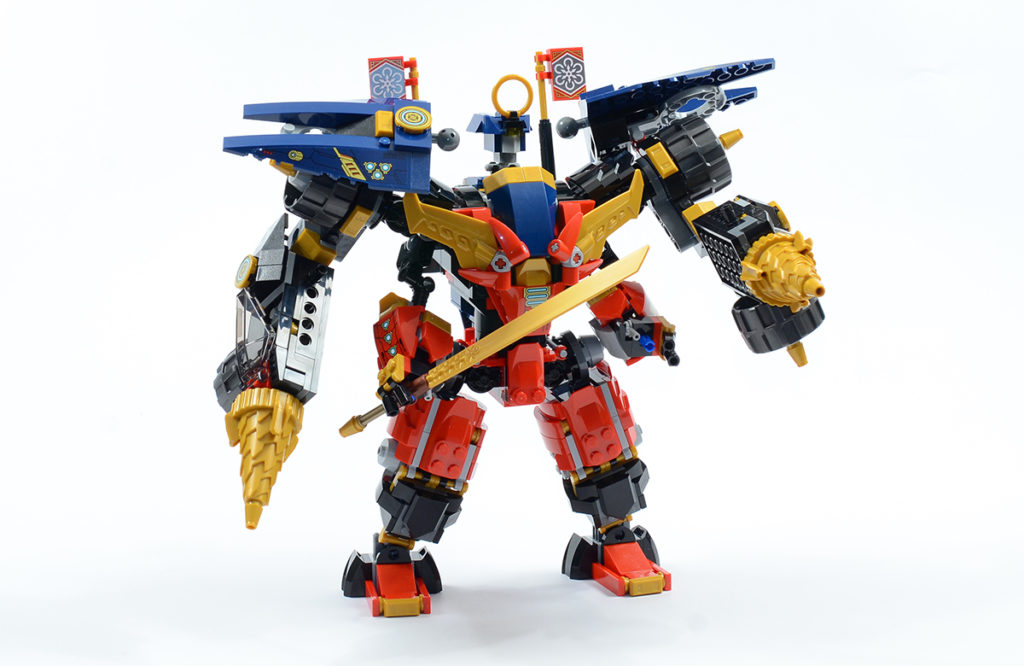 Paring back a bit on everything on top, we tried out Kai’s mech with the extra height of Zane’s ice machine serving as legs. It looks lean and athletic like this, and it’s easier to pose than when everything else is added up top. For the autonomous mech look, we then added on the robotic head once again, which also works just as well.

Stripping the head back off and adding on Cole’s driller arms, here’s another different look for a manually-piloted mech without the extra adornment of extra shoulder pads.

Finally, here’s the mech almost all built up, just leaving off the wings from Jay’s flyers. Leaving those off does make it easier to dynamically pose the driller arms.

LEGO 71765 Ninja Ultra Combo Mech is available now from ZAVVI, so you can try out your own combinations. Check out our full review of the brand new NINJAGO set here.