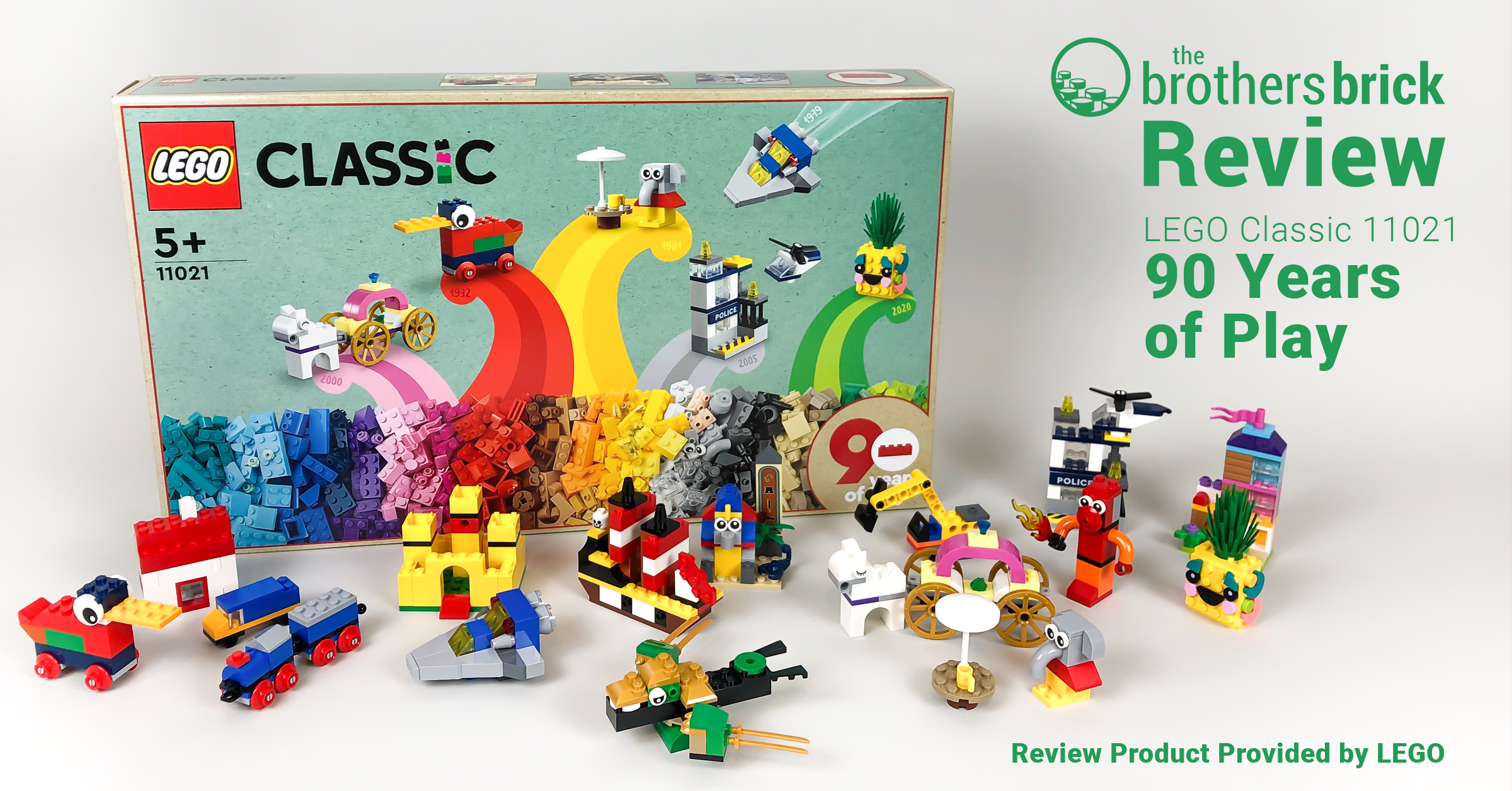 While we don’t typically cover new sets in the Classic parts pack theme, when we saw LEGO Classic 11021 90 Years Of PlayWe were immediately drawn to the nostalgia factor when it was first announced. Meant to celebrate the company’s 90th anniversary this year, the set includes lots of nods to iconic themes and sets from throughout LEGO’s history. Personally, having grown up with some of the early themes like Castle, Town, and of course, Space, this set held a certain charm for me, and I’m sure many of you will feel the same. The set includes 1,100 pieces and is available now on LEGO’s website for US $49.99 | CAN $64.99 | UK £44.99.

The LEGO Group provided a copy of the set to The Brothers Brick for review. TBB will not be covered or given positive reviews if they are provided with products to review.

Unboxing the parts and the instructions

The box’s front is decorated with the LEGO Classic branding and the colorful spread of parts along its bottom, just like other sets in this theme. What makes this set special is that instead of random creations, this set includes 15 micro models inspired by many of LEGO’s most popular themes. There is also another branding graphic on the lower right corner showing 90 years of play, which includes the original red 2×4 brick which started it all. 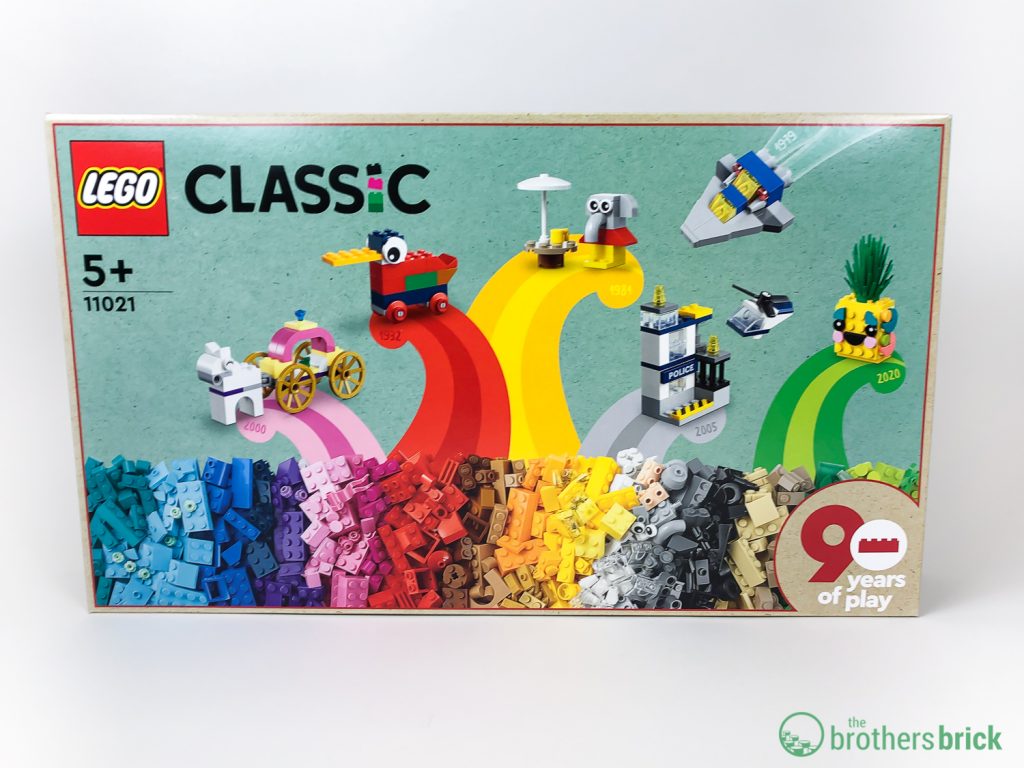 The back of this box is busier. The bottom of the box has a narrow strip that shows the same rainbow collection, with the LEGO Classic logo repeated at the top left. The rest of this box features a twisting timeline that shows each micro model, the image of the product or theme that inspired it, as well as the year it was released. The timeline starts with the wooden duck pull toy from 1932 and ends with the Dots theme introduced for 2020. 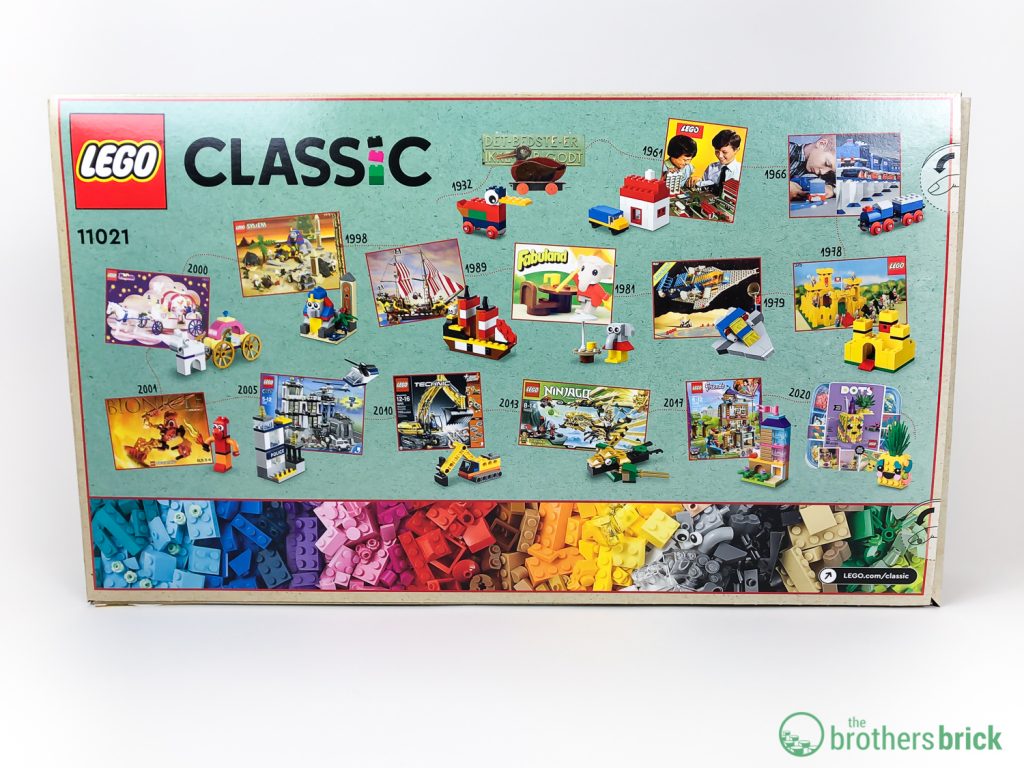 Along the top are a few images taken directly from some of the themes’ original products, including Fabuland and Classic Space. 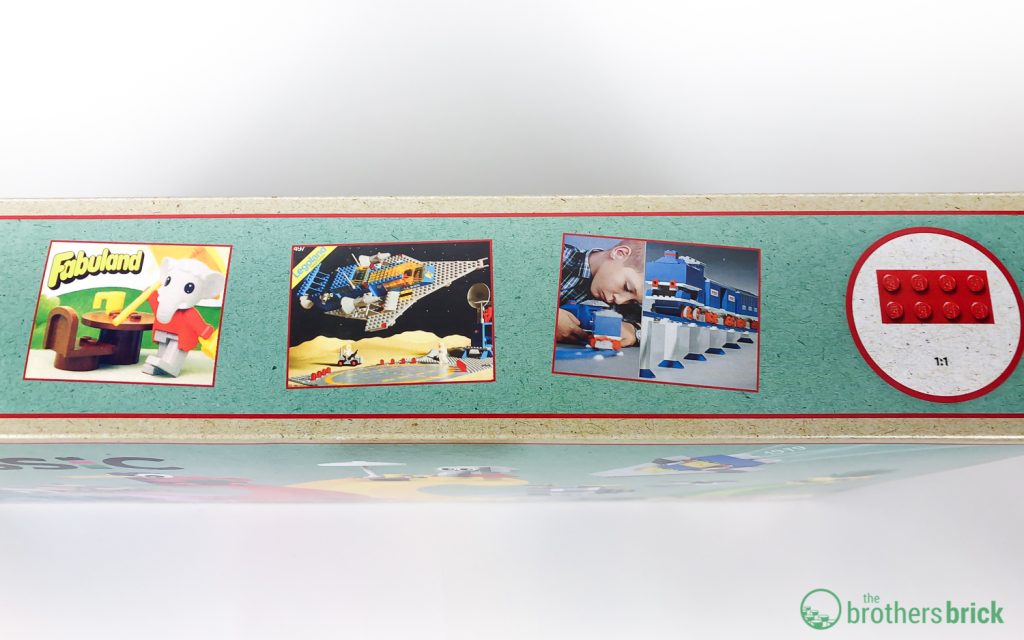 6 numbered bags are included in the box, along with the instructions to make the 15 micro models. The set includes 5 unnumbered bags. The rest of the pieces are loosely grouped according to color. 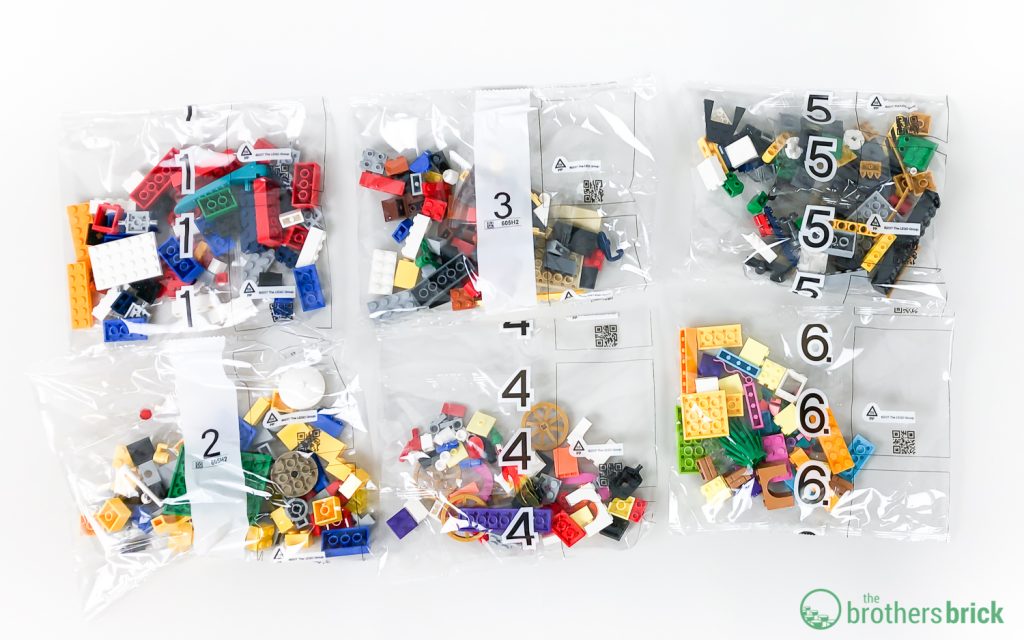 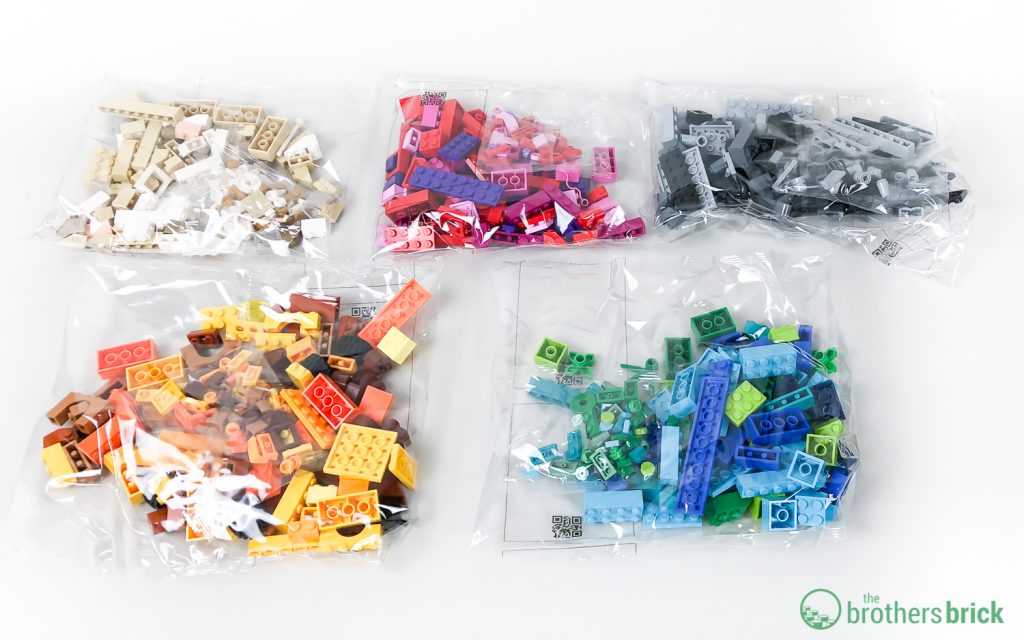 There are also two instruction booklets. Booklet one covers the first 8 models from System to Pharoh’s Quest, while booklet two covers Ninjago through Dots. 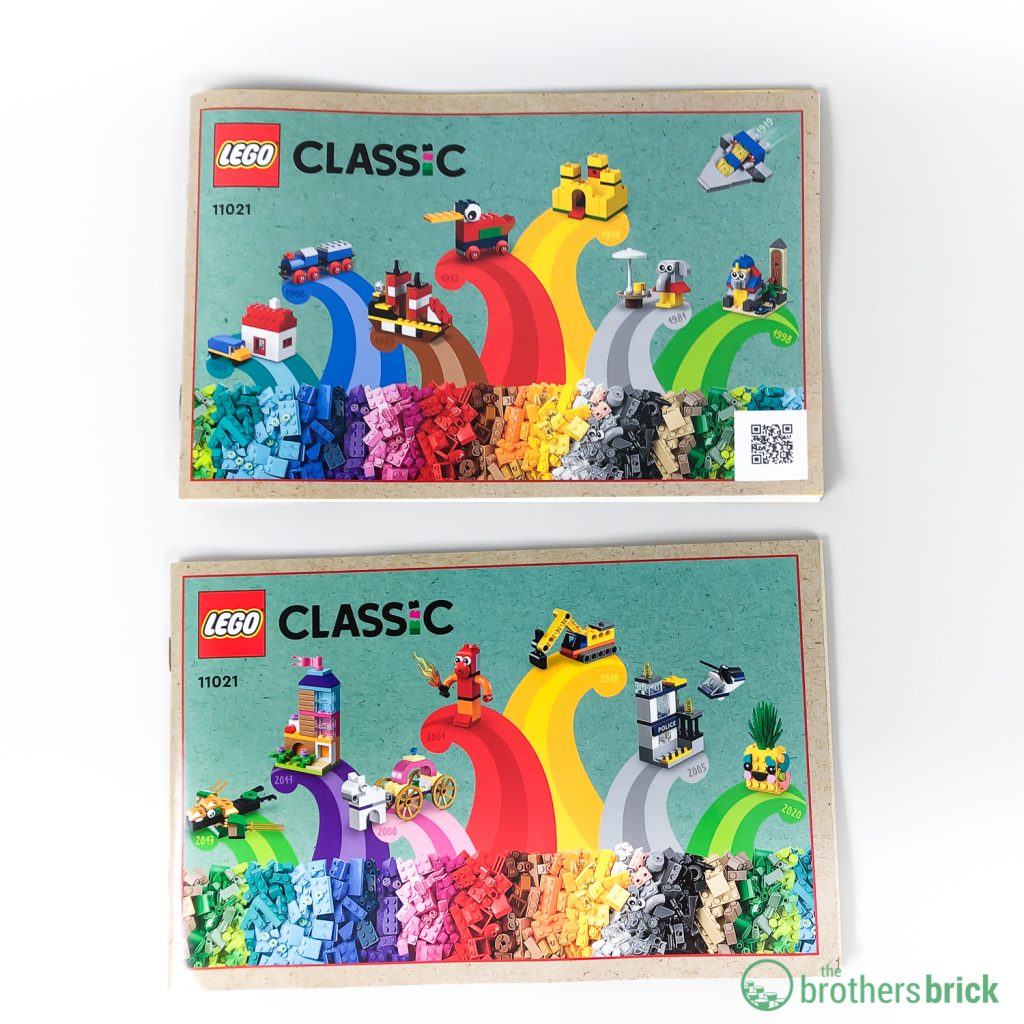 Bag number one contains a model that was inspired by the original wooden duck pull toys from before the red brick. Next, a simple house or car from the first LEGO System theme. Finally, a small, blue train. These models are easy to build and very basic. 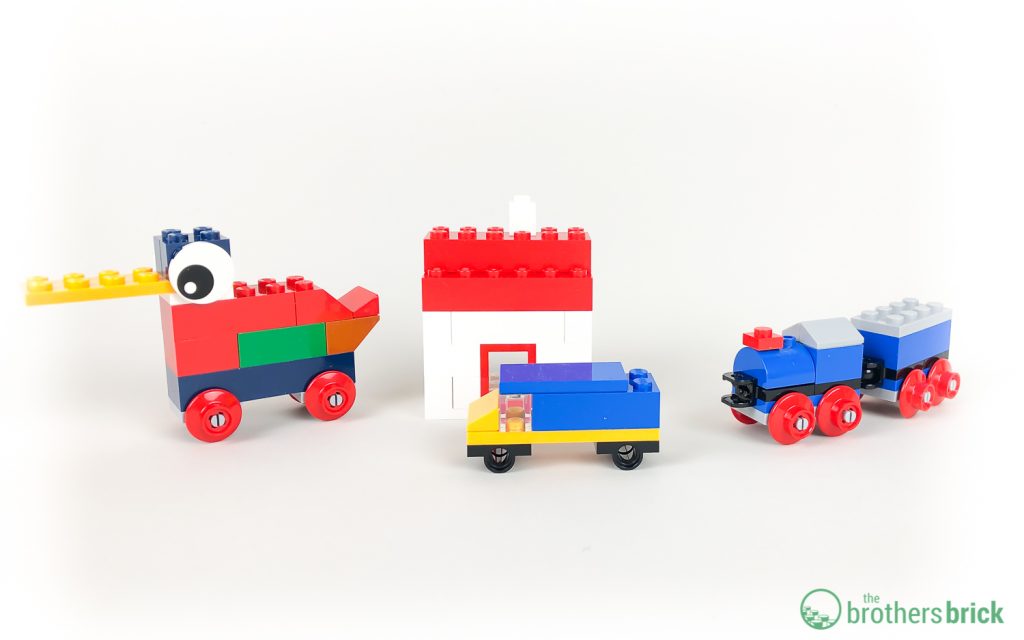 Bag number two covers a period of three years, beginning with the iconic yellow castle from 1978. It is my favorite model from the Space theme. Next is a Fabiuland elk with an outdoor cafe table. 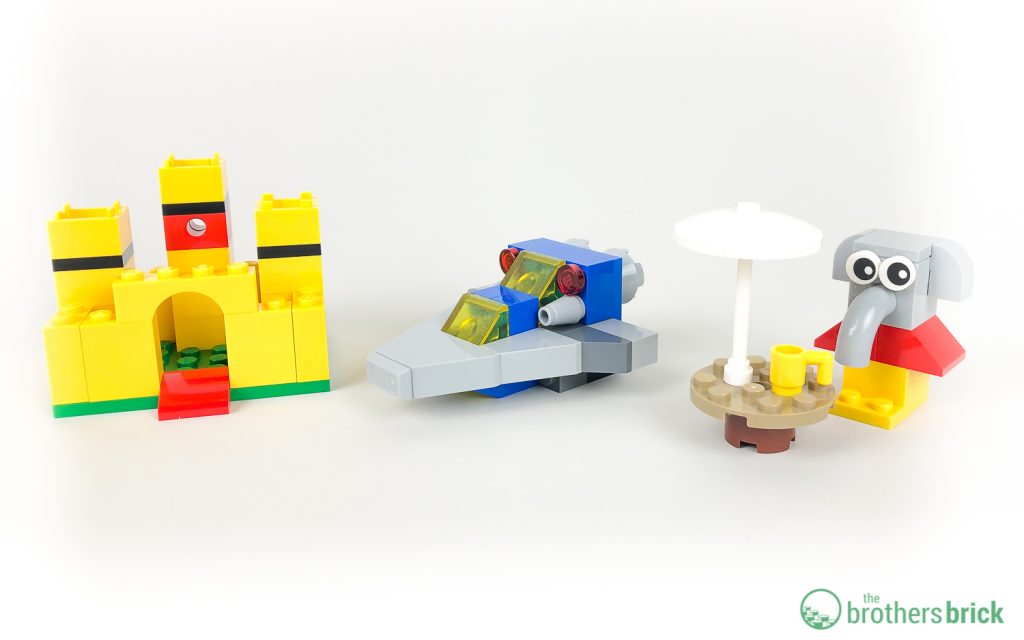 Bag number three covers almost an entire decade, starting with a pirate ship that includes 4 of the new 1×2 inverted slope in black for the stern of the boat. The last model is the Sphinx and an obelisk from the 1998 Pharoh’s Quest. 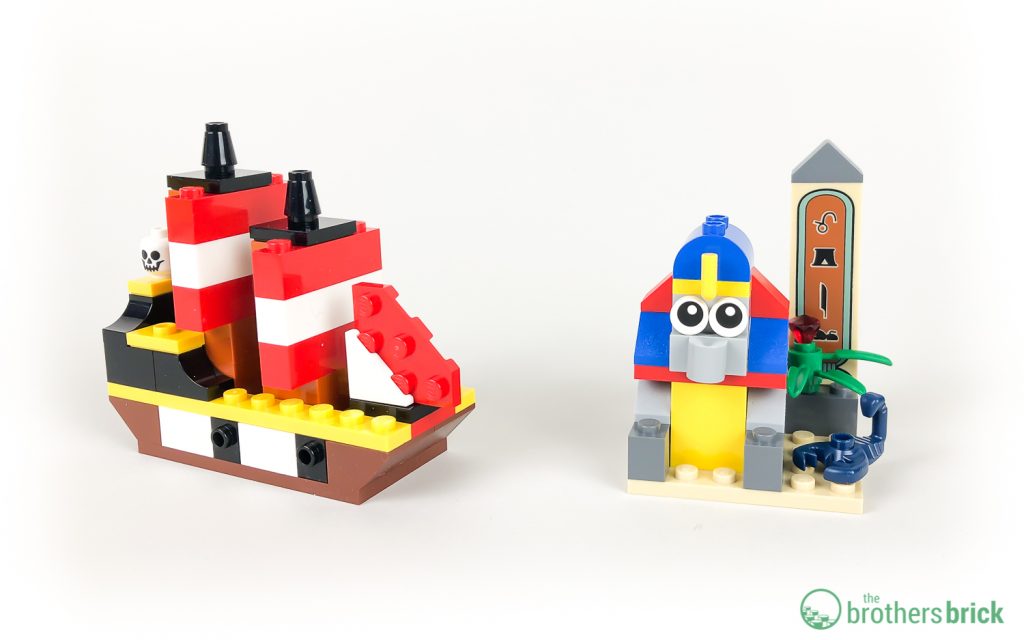 Bag number four includes both the obscure theme of Belleville and the most popular LEGO fan theme, Bionicle. The Belleville model features a horse-drawn carriage. The Bionicle model represents a Toa of Fire. 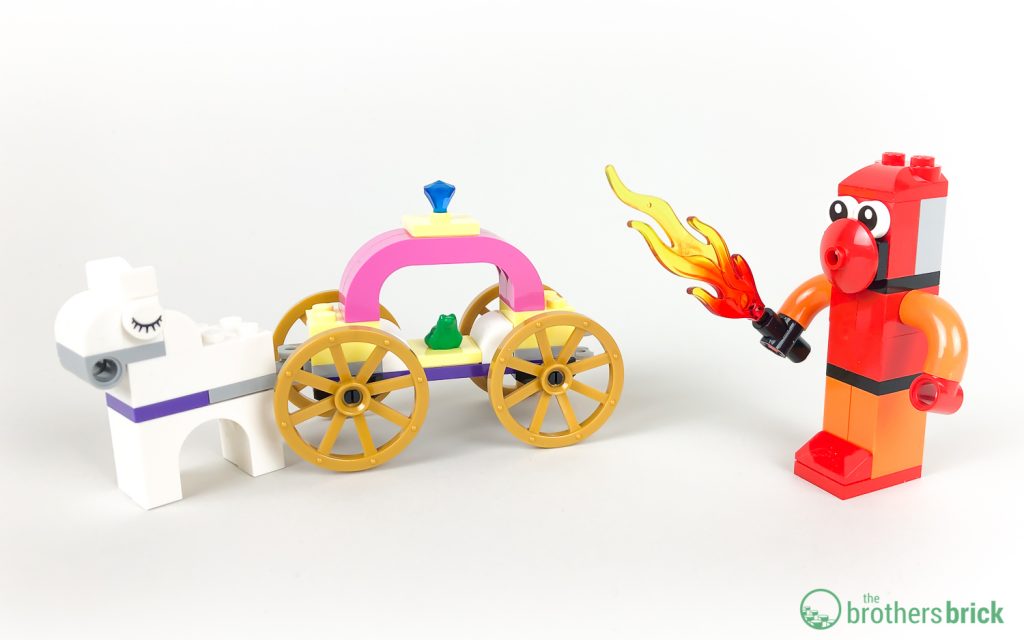 Bag number five covers most decade. It starts with City and the police stations, which include a neat helicopter that was made with just 7 pieces. Technic follows with a micro articulated drill. Finally, Lloyd’s green dragon is representing Ninjago, another very popular theme that was retired in 2013 but was re-introduced after fans rallied to bring the theme back. 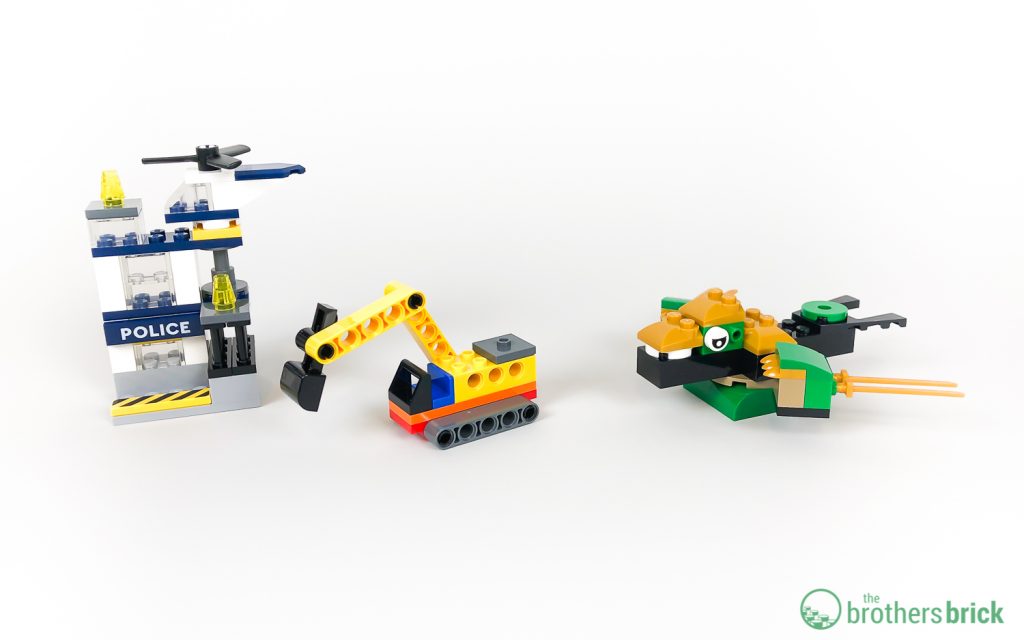 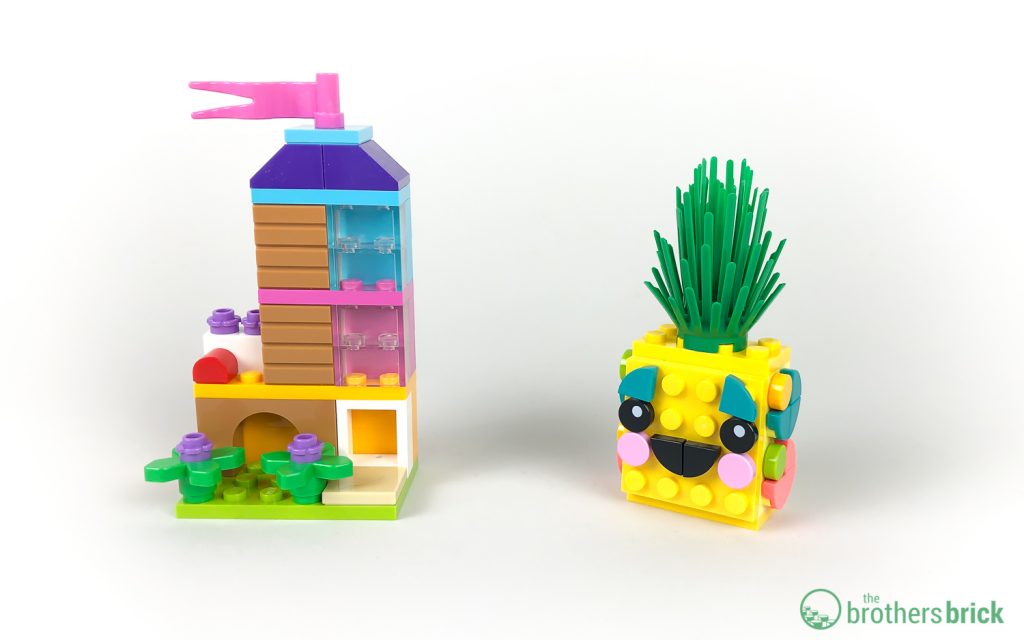 Except for a few models, the finished models are very bland and use very basic techniques. The 15 models took me around 30 minutes to build. But let’s face it, these sets are really only good for filling out your collection with some colors you don’t normally get. The micro models are great for desk ornaments. The rest of the parts include basic bricks and slopes as well as a variety specialized parts that can be used in many models in a wide range of colors, including some light nougat. 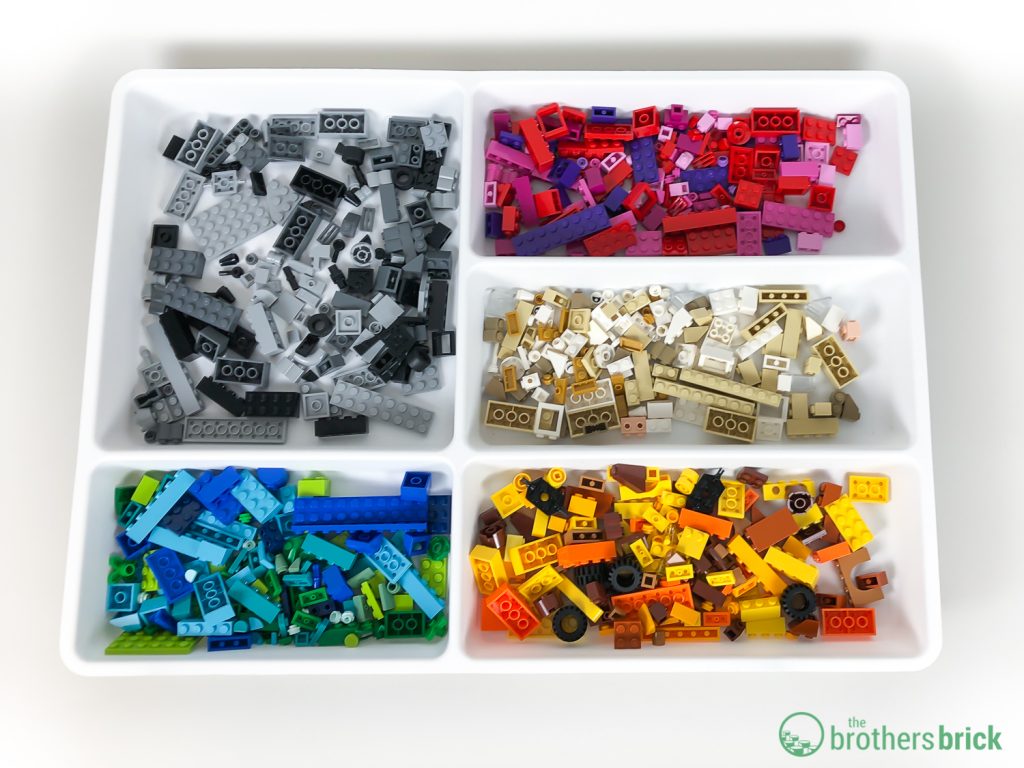 Although I enjoyed some of the micro-models, I wish more thought had been given to making them more complex and using more of their parts. It felt a bit forced—like LEGO took a normal Classic set and just dropped in a couple of quick builds at the end. Despite this, I still recommend the set to anyone who is looking to add some new colors to their collection. The set comes with 1,100 pieces at $50, making it a great parts pack.

The LEGO Group provided a copy of the set to The Brothers Brick for review. TBB will not be covered or given positive reviews if they are provided with products to review.

Toys Daily Share - September 22, 2022 0
Warner Bros. announced that the complete animated series will be available for purchase. Krypto the SuperdogAugust will see the series on home video....