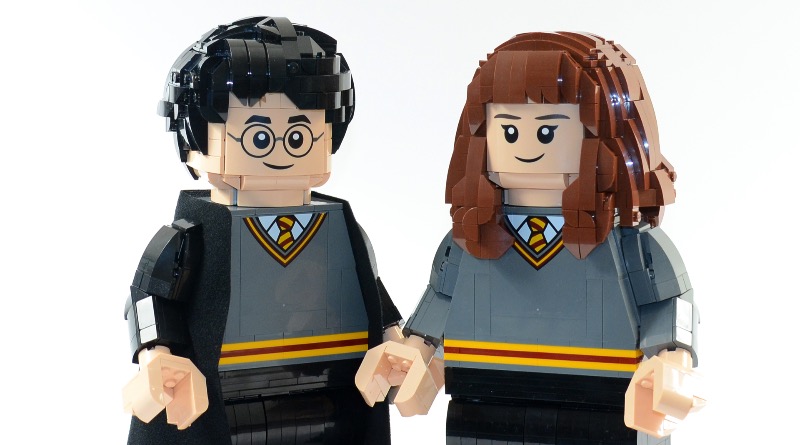 76393 Harry Potter & Hermione Granger feels like an ambitious side project for the LEGO Harry Potter theme – but is it a worthy intro to what could be a brand new template for buildable characters?

The LEGO Group may have tried to signal that things would be different by filling a spot with 75979 Hedwig in the 2020 LEGO Harry Potter lineup, but this summer has exceeded all expectations. A whopping three out of eight slots are taken up with non-playsets in 76394 Fawkes, Dumbledore’s Phoenix; 76392 Hogwarts Wizard’s Chess (which yeah, could arguably be a ‘playset’, but it’s really a chess set); and finally the subject of this review, 76393 Harry Potter & Hermione Granger.

It’s not a traditional playset, but 76393 Harry Potter & Hermione Granger is more expensive than any other Harry Potter sets. The design team must either have a lot of faith in this product to make it bigger and more expensive than a typical Hogwarts set, or they’ve been drinking some bootleg Felix Felicis (aka liquid luck) and it’s going to have worn off by the time the sales figures roll around.

Just a fun factoid, but did you know that this isn’t the first big buildable minifigure the LEGO Group has released? That title goes to 2000’s 3723 LEGO Mini-Figure, which retailed for $149.99 in the US and stood over double the height of Harry and Hermione. If you thought the LEGO Group just came around to releasing giant display pieces for adults – think againWe are!

With that background in mind, let’s find out if 76393 Harry Potter & Hermione Granger is worth both your money and a place on your mantle, or wherever you show off the ever-growing number of LEGO display pieces. Plus, we’ll get to the question on everyone’s mind: where’s Ron?!

Like 76388 Hogsmeade Village View, the build for 76393 Harry Potter & Hermione Grandger has been pleasantly split into two booklets. This makes them ideal for a collaborative building experience between families, partners, and friends. friends, et al. You may indeed want to share the build with someone else; after tackling Harry, we weren’t in much mood to do it all again, and had to let the set sit for a couple of days before coming back to build Hermione.

That’s not to say building one of these big figures isn’t enjoyable, but it’s not ‘I want to do this twice in a row’Enjoyable to an extraordinary degree. Once we mustered the energy for a second go around, there turned out to be a subtle difference in the torso build: Harry’s arm connection needs to leave space for his wonderful large fabric cloak, while Hermione’s arms sit flush against her torso. Of course, there’s also the major difference between the figures, their respective hair, which wind up being the most fun and rewarding parts to build given all the intricate details that look random until they come together.

The builds for Harry and Hermione are identical, apart from these two differences. Each separate part of a standard LEGO minifigure gets built separately – left and right legs, hips, torso, left and right arms, each hand, and head, though unlike a minifigure the head and hair are fused as one. It is a smart decision to build each minifigure component separately. This gives you the feeling that you are actually building a giant minifigure.

There are many components to choose from, so the whole process is varied. Even brick-stacking in legs can be a part of it. Much like 76394 Fawkes, Dumbledore’s Phoenix, 76393 Harry Potter & Hermione Granger showcases the design team’s deep knowledge of LEGO geometry, as well as the LEGO Group’s vast catalogue of generally useful parts for both detail and internal stability. 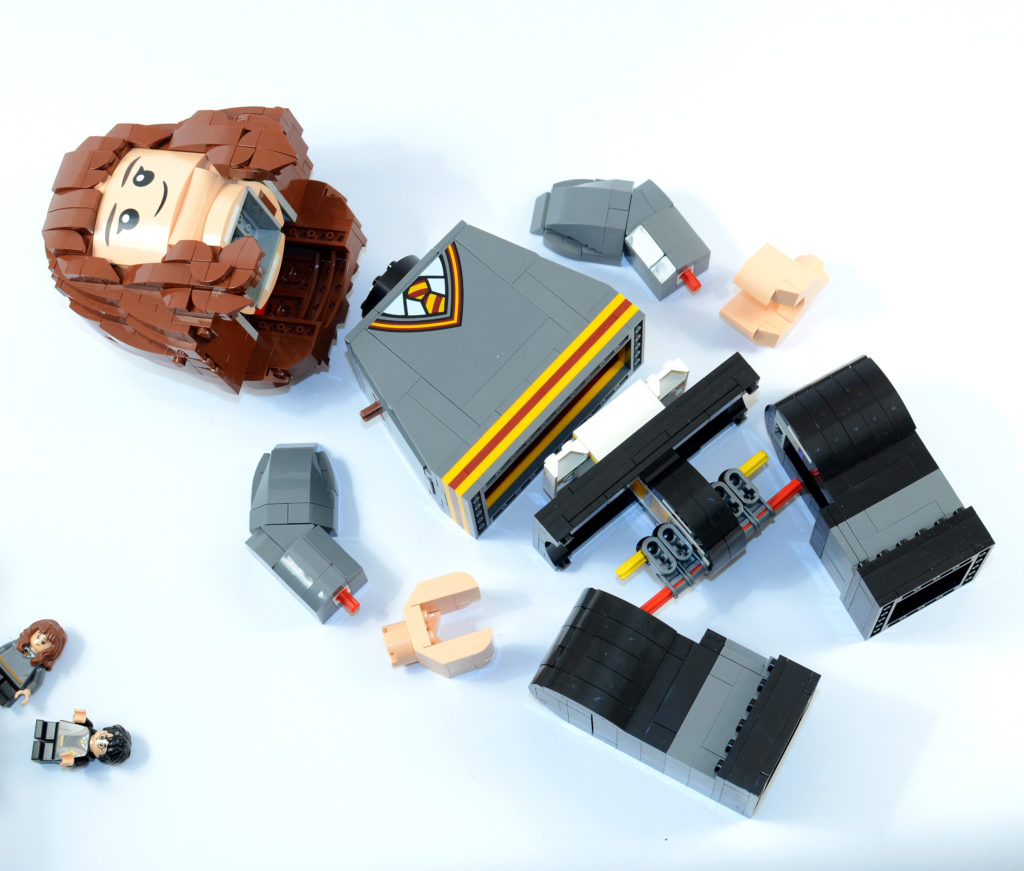 Because of this internal stability, the figures can be picked up and moved around without fear. The only exception to the tips of the wands which easily splinter, they can also be posed. The size chosen for them also feels right – they’re larger than you might imagine, but not so ridiculously large that they become cumbersome or take up too much real estate. The models look great once they are complete and capture the iconic minifigure’s visage perfectly.

Although they look very similar to minifigures, they don’t actually have 1:1 (or 6-1 in this case) replicas of the minifigures they were modeled after. Their heads and hair very clearly match the Philosopher’s Stone and Chamber of Secrets minifigures of Harry and Hermione, but changes have been made: the big figures have regular minifigure legs instead of short legs; Hermione has a grey stripe through her legs; and Harry has a wonderful cloak, which fans have been dying to get in minifigure-scale for the likes of Wizarding World robes, Jedi robes, trench coats, and much more.

You could sour at these differences given that they demonstrate enhancements to minifigures that don’t exist, but the designer also had to make the best choices for this set as a big display piece. Immobile legs on the first set of this type would be no fun, and Harry’s big cloak undeniably looks and feels awesome, so these changes seem justified. One unfortunate aspect that is carried over from the minifigures is Hermione’s utter inability to turn her head because of her hair being in the way.

The big question that remains is why Harry and Hermione are in this set? Or, why do we have two figures? Harry and Hermione don’t make a good couple as characters. Sure, they have their share of scenes with each other alone, but if you’re thinking duos in Harry Potter, you’d think Harry and Ron. More likely, you’d think the trio (#JusticeForRon, anyone?). We’re not suggesting that this set should’ve included Ron and cost £180, but after building the set, and looking at it, and sitting with it, it does feel like it could’ve been just Harry and cost £60.

This set is more for display than play, as it is a pair of large, buildable objects. Yes, the figures can be posed as minifigures and played with in the same way. kidsThey could be used as giant dolls. However, the LEGO Group’s own description underlines how these figures will end up on display, with lines like: “When the action stops, kids can pose the adjustable models to make a magical display for their room,”Also, “Give kids aged 10 and up the two iconic Hogwarts students to build, play with and put on display to amaze their friends.”

Is there anything more beautiful than displaying these two students who clearly miss Ron? In this reviewer’s opinion: no.

We’d like to see this style of set succeed and pop up in different themes, but having the test case be an odd couple of characters – and, therefore, a higher-priced set – seems like the wrong way to go. The LEGO Group could’ve released just Harry, seen how he did, and then followed him up with separate Hermione and Ron sets, allowing us to assemble the trio at our own pace.

If you prefer to see it that way, Nil or two make up the entire set. While other display-oriented sets come with stands and often a minifigure or two, this set certainly doesn’t need them since the characters speak for themselves. Plus, Harry and Hermione are both readily available in a host of other current sets, including 76387 Hogwarts: Fluffy Encounter and 76386 Hogwarts: Polyjuice Potion Mistake (even if they’re not exactly the same versions). 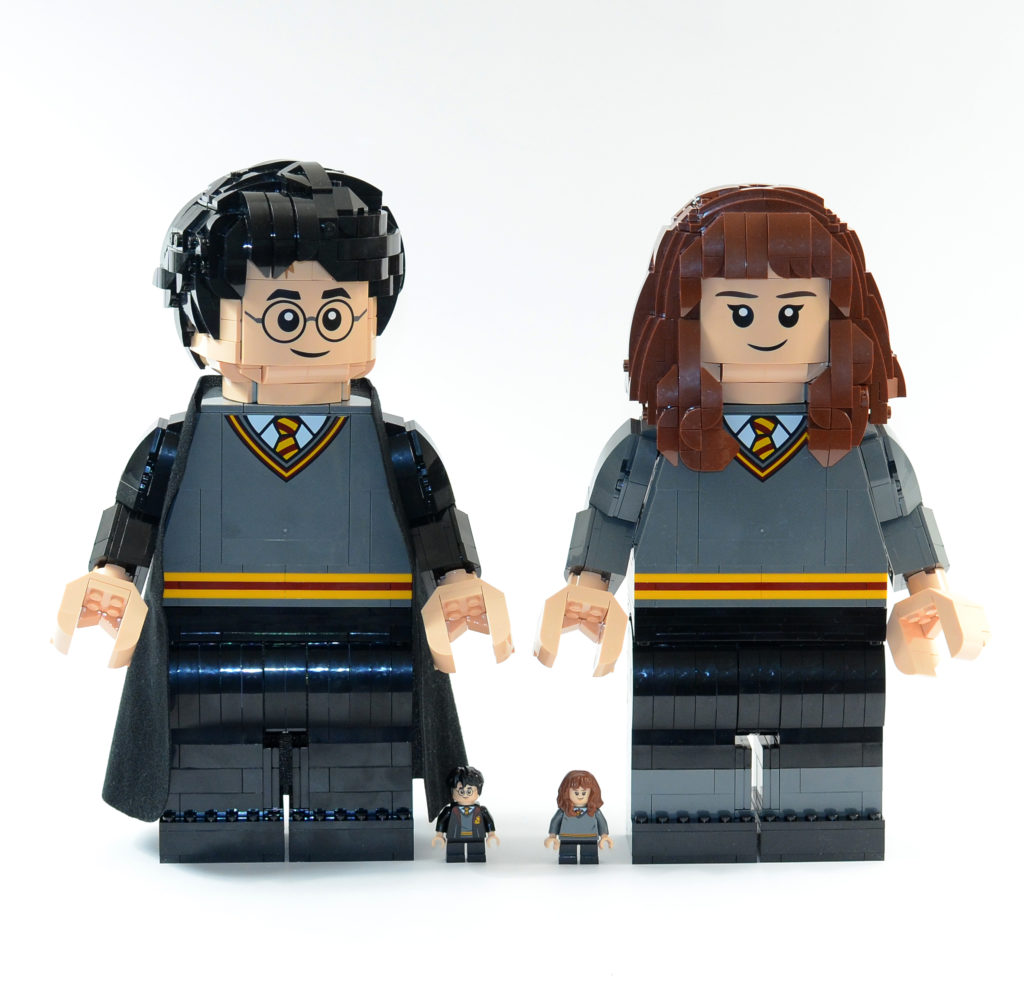 The only issue on the price side isn’t with what you pay for what’s included, but with the choice to include two figures in the first place. For just one big minifigure and half the price, this set would’ve been a much easier recommendation than as it stands.

Paradoxically, 76393 Harry Potter & Hermione Granger ends up a terrifically-designed set that feels hard to fully recommend. The LEGO minifigures we all love have been beautifully rendered at large scale. This makes it easy to build and even more enjoyable to admire once completed. The design makes use of every part, and nothing looks terribly awkward or bloated. It can even move in all the ways that a minifigure can, so it can be posed sitting, standing, or teased into a slight walking.

If this was a review of a set that contained just one big, buildable minifigure, it’d be an easy 10/10, 100%, five stars, go out and buy it now. But it’s not; it’s a set of two. Two builds make the experience a bit more difficult after the first. Two big figures add significantly to the cost. Although they do have some similarities, the two characters are not a perfect match.

Therefore, it’s a harder sell. You’ll get good value for money, and good designs, but you have to want to spend that much money on big minifigures, rather than traditional playsets or the myriad other display pieces that the LEGO Group announces every other week. With so much worthwhile LEGO vying for your money, it’s a shame that the first big minifigure design requires this much commitment. 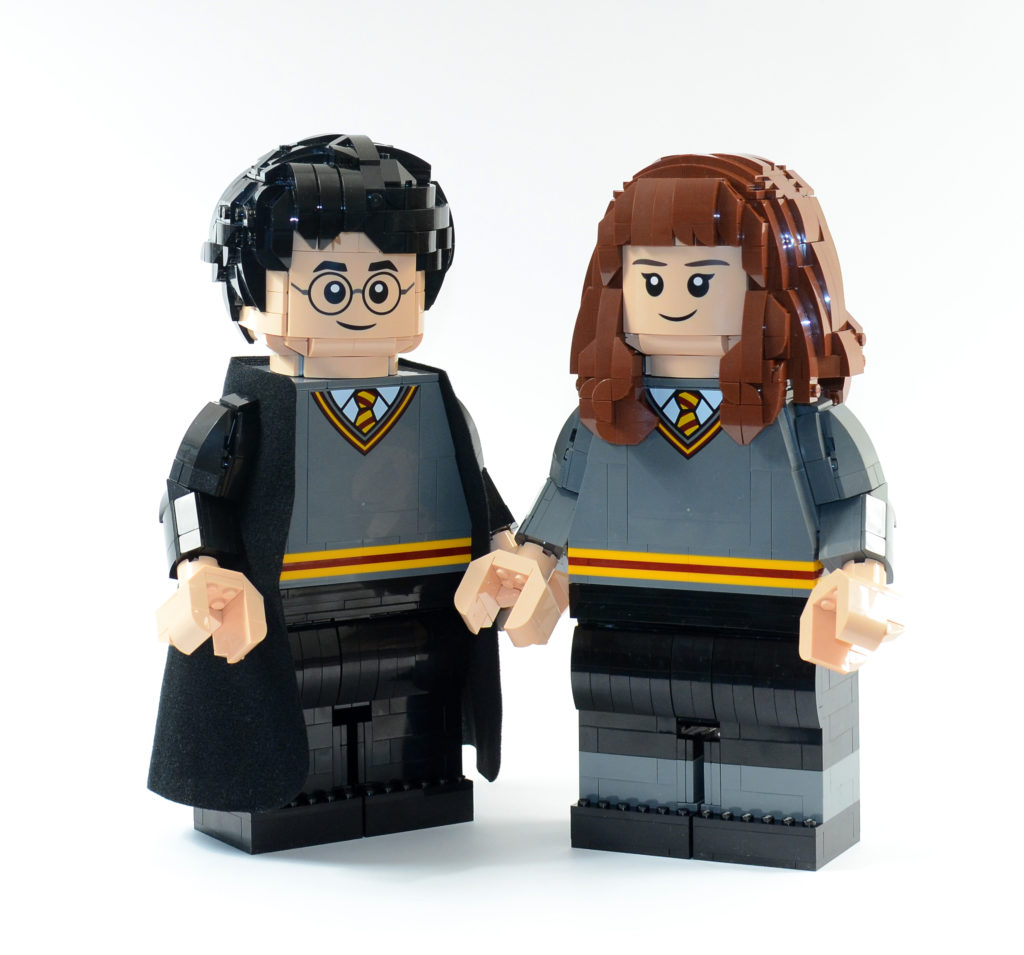 The LEGO Group provided this product for review.

It takes approximately an hour and a quarter to build one of the figures in 76393 Harry Potter & Hermione Grandger. You might also want to take a break to rest between them. Déjà vu could occur at any time.

There are 1,673 pieces in 76393 Harry Potter & Hermione Granger, including a number in light nougat (the same colour as the heads and hands of the characters’ standard minifigures), which up until recently only existed in model shops at LEGOLAND parks.