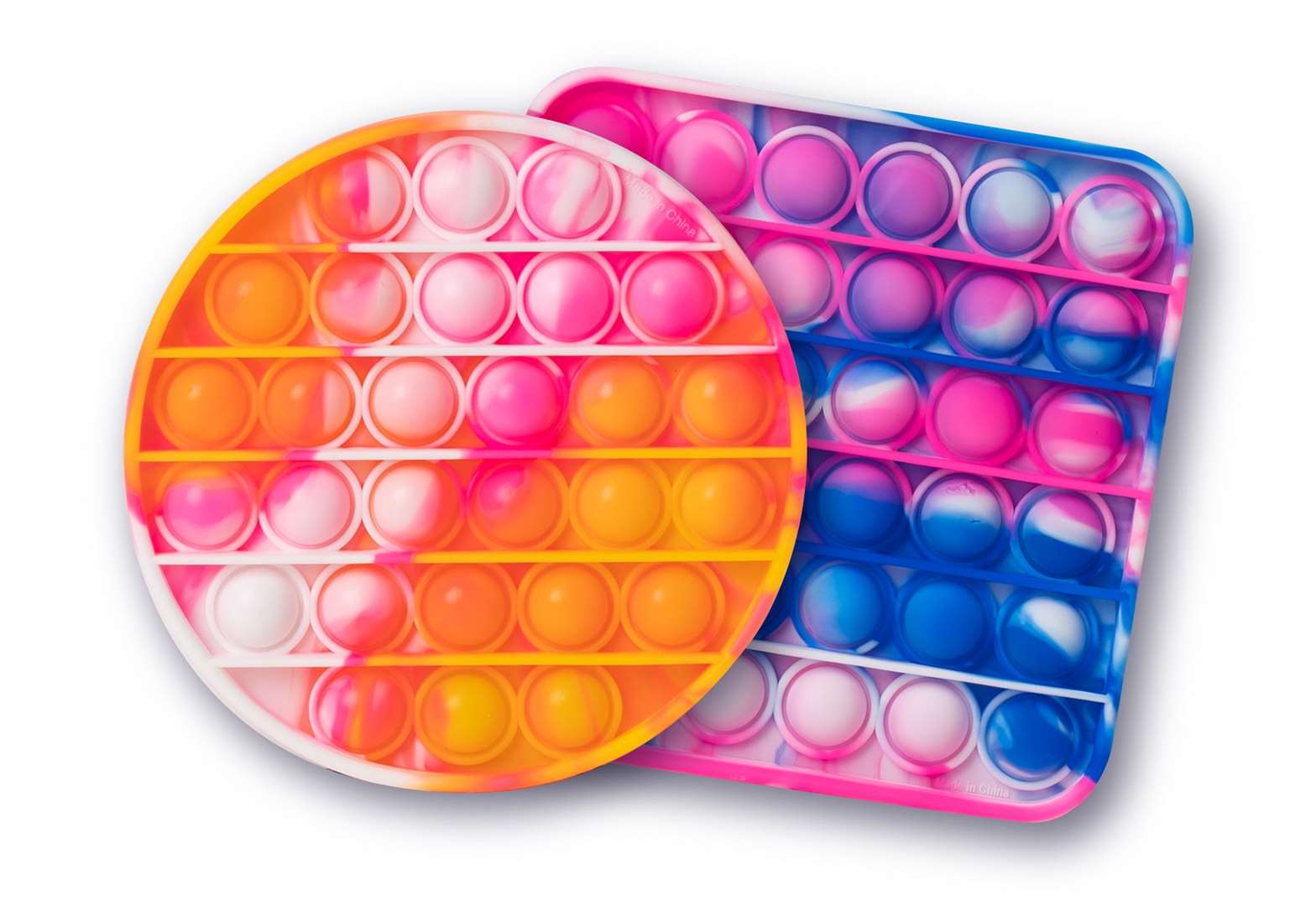 Poppers, push poppers and pop-its are some of the names used for the newest trend in children’s fidget toys.

The sensory toys look like a mix of an ice cube tray, and a huge sheet of bubble wrap. They have become mainstream thanks to Tik Tok videos as well as social media.

Push poppers were originally designed for children with anxiety and other special educational needs. Parents who want their children to enjoy the latest playground trend and internet trend are snapping up push poppers in their thousands.

However, families are still reeling from 2018’s fidget spinner obsession and the overwhelming demand for gooey squelching slime in 2019 that covered many of our soft furnishings. The online-driven fidget poppers continue to be a popular must-have.

A quick internet search will yield hundreds of challenges and games where players compete to push and pop all their empty bubbles first. There are also some more cynical attempts at seeing if avid poppers can sign up to social media channels or accounts faster than the person in the video to pop all their bubbles.

Alongside a raft of internet shopping options, high street stores including Claire’s, The Entertainer, Smyths Toys and The Works are all selling a variety of the strange yet satisfying gadget, where prices range from between £2 and £6 depending on the size.

H.Grossman Ltd placed orders for just under 3million of these fidgety favourites this year, due to the eye-popping amount of requests from convenience stores and shops keen to purchase the sought-after stock.

The company, based in Scotland, stated that the demand from retailers to buy the pocket-money-style toys was ‘wild’.

They also come in a variety of styles and colours, just like slime pots, fidget spinners, or the cartoon-looking antistress toys Squishies.

There are shaped poppers that can be molded into the silhouettes or shapes of any number of things, including unicorns, hearts and butterflies, tie dye swirls and rainbow patterns, glitter pop fidgets and camouflage print, as well as keyring-style poppers that only produce one or two bubbles and smaller poppers that small fingers can’t resist.

There are many options for glow in the dark poppers if the lights go out at night, or in schools.

However, just like the loom-brands craze, which adorned wrists or ankles with brightly coloured rubber bands style jewellery a few decades ago, and that reportedly found its route into rivers and oceans, environmentalists might want to pop the bubble on this trend as well.

Fidget toys, like many toys made of plastic, cannot be recycled by traditional methods. This is a common problem for both environmental organisations and council refuse specialists.

Charity Friends of the Earth expressed concern that items that are popular in one moment and then go out of fashion the next are adding to the planet’s ‘unwanted plastic’.

Related：  Popper fidget toys are the latest craze for children in 2021, but how eco-friendly are they?
Powered by Inline Related Posts

Complex materials can make recycling difficult and costly. Most local authorities will accept only single-material waste, such as glass, cardboard, or aluminium. Instead of donating unwanted toys to charity, they are sent into household waste bins. They then either go to landfill or incineration.

TerraCycle, an innovative recycling organization, explained this to a spokesperson: “Where it becomes more complicated is when a waste item is made out of a complex material, or several materials, as is the case with most toys. The process of recycling these materials is complicated and costly and the end product is worth less than the cost of recycling the waste, so the economics simply do not work.”

TerraCycle started a recycling program for tiny toys and their packaging during the LOL doll craze, two years ago. This was to help families dispose them ethically.

TerraCycle Toys Zero Waste box is available for families who want to recycle large quantities of plastic toys that are no longer being used.

The boxes come in various sizes. You can fill them with any waste that you don’t want to recycle with local councils. TerraCycle will then recycle all materials collected, saving them from incineration or landfill. Find out more about the collection program. here.

Under a new scheme, families who have outgrown or no longer need their football boots can recycle them. Football Rebooted collects the footwear via freepost envelopes or through donations from top-flight clubs before distributing it to younger players who are in need of new equipment.

Our Eat, Drink, Shop section has more news about big brands as well as good places to eat a delicious meal.

Toys Daily Share - August 9, 2022 0
Many people over a certain age have a lot of things they keep for future use. Ann Snuggs confesses to having a basement full o'...