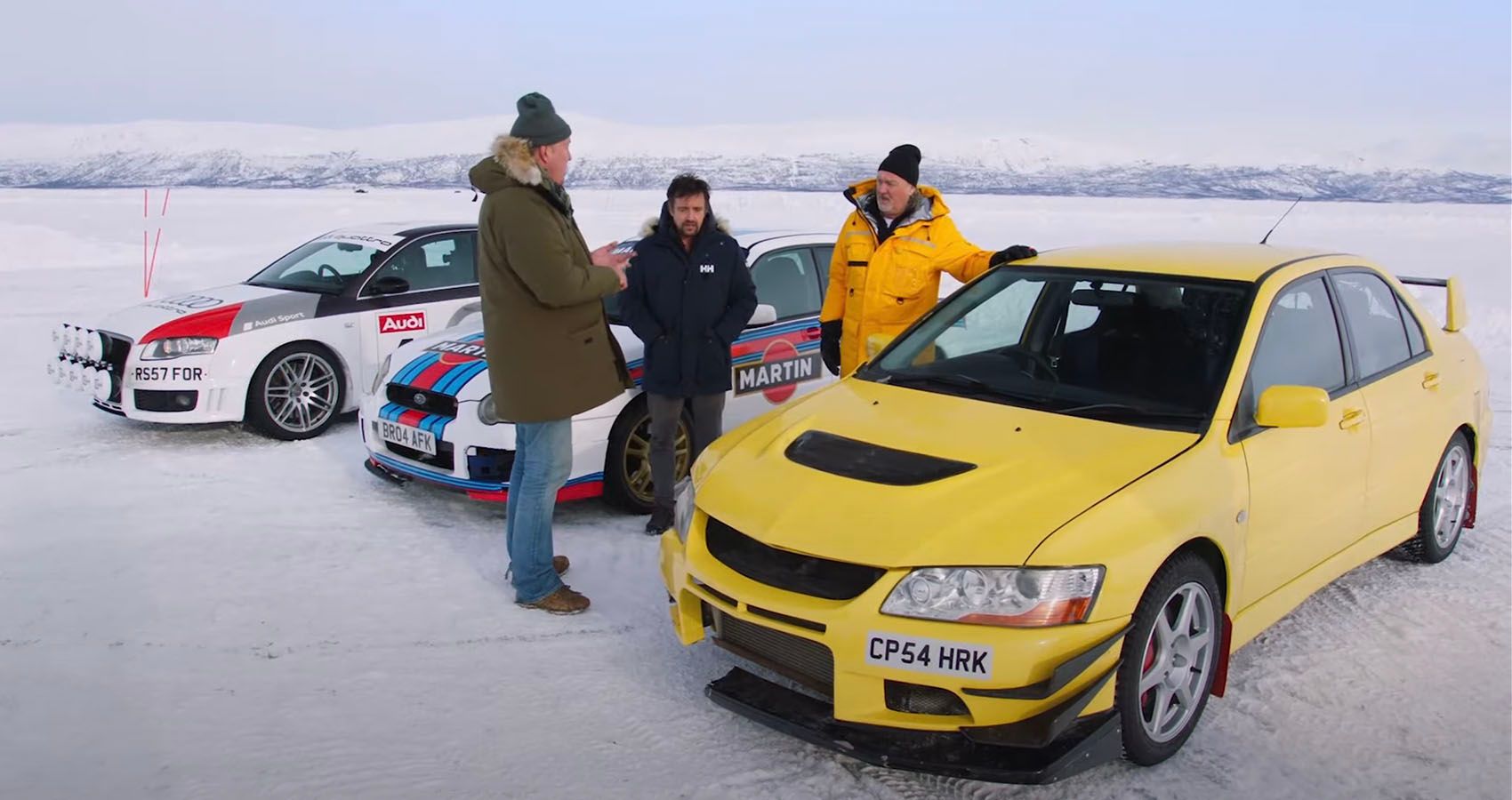 The Grand TourThey continued the tradition that was started by the three when the three worked together. Top Gear, where they went on extraordinary adventures with cars that really weren’t designed to tackle the challenge. Luckily for James May and Richard Hammond and Jeremy Clarkson, their new producers had even more money, making their expeditions even more grand.

Their first adventure. The Grand Tour involved the humble Beach Buggy – made famous by the Meyers Manx – where they drove to the north border of Namibia using mostly the coastline. Their next one involved transporting fish from the coast of Mozambique to a small village inland – which went about as well as expected. The next season saw not one, but three specials. These included driving RVs across the US desert and chasing down animals in Columbia. JohnFrom the middle to civilization in Mongolia, you can walk across it. The next season included only specials – from driving boats in Cambodia and Vietnam to looking for lost treasure in Madagascar and cruising the north of Scotland with classic American luxury barges.

Finally, the trio welcomed a new season with a trip across the very north of Scandinavia in two rally cars – and an Audi. Each of these adventures were amazing and we can’t wait to see what the next adventure brings. Here are ten of our favorite adventures. Second-hand carsFrom The Grand Tour specials.

During the COVID-19 pandemic, the three presenters weren’t allowed to film in countries other than the British Isles, so they decided to import three American luxury barges and tour the north coast of Scotland. Richard Hammond purchased a Buick Riviera Boattail and James May a Cadillac Coupe DeVille. Jeremy Clarkson a Lincoln Continental Mark V.

Jeremy’s Lincoln was the longest of the lot and was the most difficult to drive in the city of Edinburgh. After driving around in search for the American-like piece of America far north, the trio decided to modify their cars to look more American. The Continental even acted as a wave-maker to help James’ Caddy to get over a floating bridge. Jeremy eventually kept his Lincoln.

During the same Scotland Special – cleverly called Lochdown – Richard Hammond’s Buick Riviera caused the most problems. The Boattail Riviera wasn’t a particularly successful model but has since gained popularity.

Hammond fitted his Riviera’s supercharger and a Dodge Charger Daytona rear wing during their modification session. The episode also saw the Buick overheat, get stuck in a ditch and flip a caravan – all in proper Grand Tour fashion. Hammond, just like Jeremy kept his Riviera, which is currently living with him in his shed until he decides what he wants to do with it.

The Grand Tour’s Columbia Special is one of the funniest of the lot. They were asked to photograph rare animals in a particular region of the country. Each of them bought an off-roader that was suitable for the terrain and fields they would be driving. Jeremy bought a sensible Jeep Wrangler, Hammond a ridiculous Chevy Silverado, and James did the typical James May thing of buying a small 4×4 – in this case, a Fiat Panda.

Amazingly, the tiny Panda was able to do everything that the huge Silverado and Jeep could, despite its low power output. The three modified their vehicles and the Panda turned into a wildlife-watching blind with camouflage netting and a camo pillowcase for James’ head. The whole episode is entertaining, and especially their resistance to discussing a specific South American crop.

Related: These are the Most Sick Rides You Can Get From The Grand Tour

The Columbia Special featured many funny situations. The best part of the Columbia Special was Hammond driving his Chevy Silverado monster car. For starters, the truck was bubble-wrapped and needed to be towed ashore – a sequence of events that included using James’ Panda as an anchor, a screaming Hammond, and the destruction of beach property. It was pretty standard stuff for the three presenters.

Another hilarious situation was when Hammond drove into a ditch in the road and Jeremy and James built a bridge over the top of the Silverado’s roof. Hammond also had trouble maneuvering the massive vehicle in Cartagena’s old town. The Chevy was able to make it to the finish line without too much difficulty, even though it was one of the slowest.

The last Grand TourSpecial filmed prior to the pandemic. ‘A Massive Hunt’The three of them went on a search for pirate treasure on the islands Reunion and Madagascar. Each presenter purchased a performance vehicle to use on the lovely roads of Reunion. Jeremy bought a Bentley Continental GT V8 – an extremely comfortable and luxurious GT car.

Upon discovering they had to go to Madagascar, they modified their cars Jeremy’s Bentley turned into what is probably one of the coolest cars ever used by the three presenters on both Top Gear and The Grand Tour. The Bentley did a fantastic job of off-roading on the terrible roads of Madagascar – eventually being used to race away from an exploding beach.

Hammond’s choice for the treasure hunt was a Ford Focus RS, a brilliant hot hatchback with all-wheel-drive and a punchy turbocharged inline-4 engine. The Focus RS did very well in the drag racing on Reunion but Hammond’s modifications to the vehicle for Madagascar were quite impressive.

Hammond switched the Focus RS’s conventional wheels for off-road tracks. This was the same as what Jeremy did with his Bentley. While this reduced the Focus’ top speed dramatically, it worked pretty well to conquer rough terrain – when Hammond was careful. Hammond replaced the wheels with normal ones again after the tracks were damaged a few more times. Ultimately, the clutch was completely destroyed before he reached the end, marking the first time he couldn’t finish one of their specials.

The final car of ‘A Massive Hunt’ was James May’s Caterham Seven. He chose this car apparently because he had always wanted to, and he did. He admitted that it wasn’t the right car for the job but enjoyed it after the episode aired.

James modified the Caterham for Madagascar. The Caterham performed admirably on the paved roads of Reunion. The resultant Caterham shared more similarities with a tractor that it did with its original model, but it worked. Although James and his car’s interior ended up being covered in warm mud most of the journey, he made it to the end without any major problems. It was also hilarious to see him covered in dirt while he drove.

The trio’s first proper adventure on The Grand TourThe trip involved three Beach Buggies, specially made for the task, that they drove along Namibia’s coast in three of their Beach Buggies. James did the right thing, turning the VW Beetle into the Meyers Manx vision. Hammond did almost the same thing with the exception of the lifted suspension, offroad tires and huge roll cage. Jeremy, however, stuffed a 3.5-liter V8 engine from a Range Rover into his vehicle.

The V8’s weight caused problems with fuel economy and ride height, but it survived. Later in the episode, the V8 overheated, and the throttle produced issues thanks to the corrugated dirt road, so Jeremy employed a high-tech method to control the throttle – a piece of string. All three buggies managed to make it to the finish line, which was a great adventure.

Related: The Grand Tour Carnage A Trois, The Height of Buffoonery that We Love

Similar to the Polar Special from their days Top GearThe Mongolia Special saw the three of them working together to get to the finish line. They were initially dropped off by helicopter and placed in a grassy area. A few minutes later, three crates were airdropped in and upon opening them, the three realized they contained vehicle parts – much like the crated Willy’s Jeep of the Second World War.

The three set about building their custom 4×4 – well, two of them anyway. After they had gotten a feel for the vehicle, they named it. ‘John’because it was a reliable vehicle. Over the course of the next few days, James and Jeremy drove John while making sure Hammond didn’t move more than a few feet as he was prone to accidents. With John’s most intact, they finally made it to civilization. The Mongolia Special is a wonderful hour and a quarter of watching pleasure with three friends, even if you are not a motoring enthusiast. ‘mucking about’.

The Grand Tour’s most recent excursion saw them driving across the north of Scandinavia, going from Norway, through Sweden, and finally ending at an airstrip in Finland – all while staying north of the Arctic Circle. They were told to buy rally-bred vehicles in order to make this trip possible. Hammond purchased a Subaru Impreza WRX STI; James a Mitsubishi Lancer Evo VIII; and Jeremy an Audi RS4. B7 – pretending it was a Sport Quattro.

A Scandi FlickIt was a wonderful special that brought the three presenters back from the pandemic lockdowns. While the challenges they did were brilliant, the hero of the episode was definitely James’ Mitsubishi. It crashed in an unorthodox Captain Slow fashion while racing down a tunnel. The car also fell through the ice as it drove over a frozen lake. Despite the fact that the front was broken and water got in every part of the car, it managed to drive to its destination. It has been a memorable car for all three of them, and we can’t get enough of the Polish Special.

What to buy and what not to buy

15 Hot Holiday Toys to Buy Now Before They Sell Out

Hot Wheels Behind-the-Scenes: How one man’s hotrod became a legend

Toys Daily Share - September 18, 2022 0
Hot Wheels were a childhood obsession that has continued to be enjoyed by generations of children for many years. Then their mothers gave...